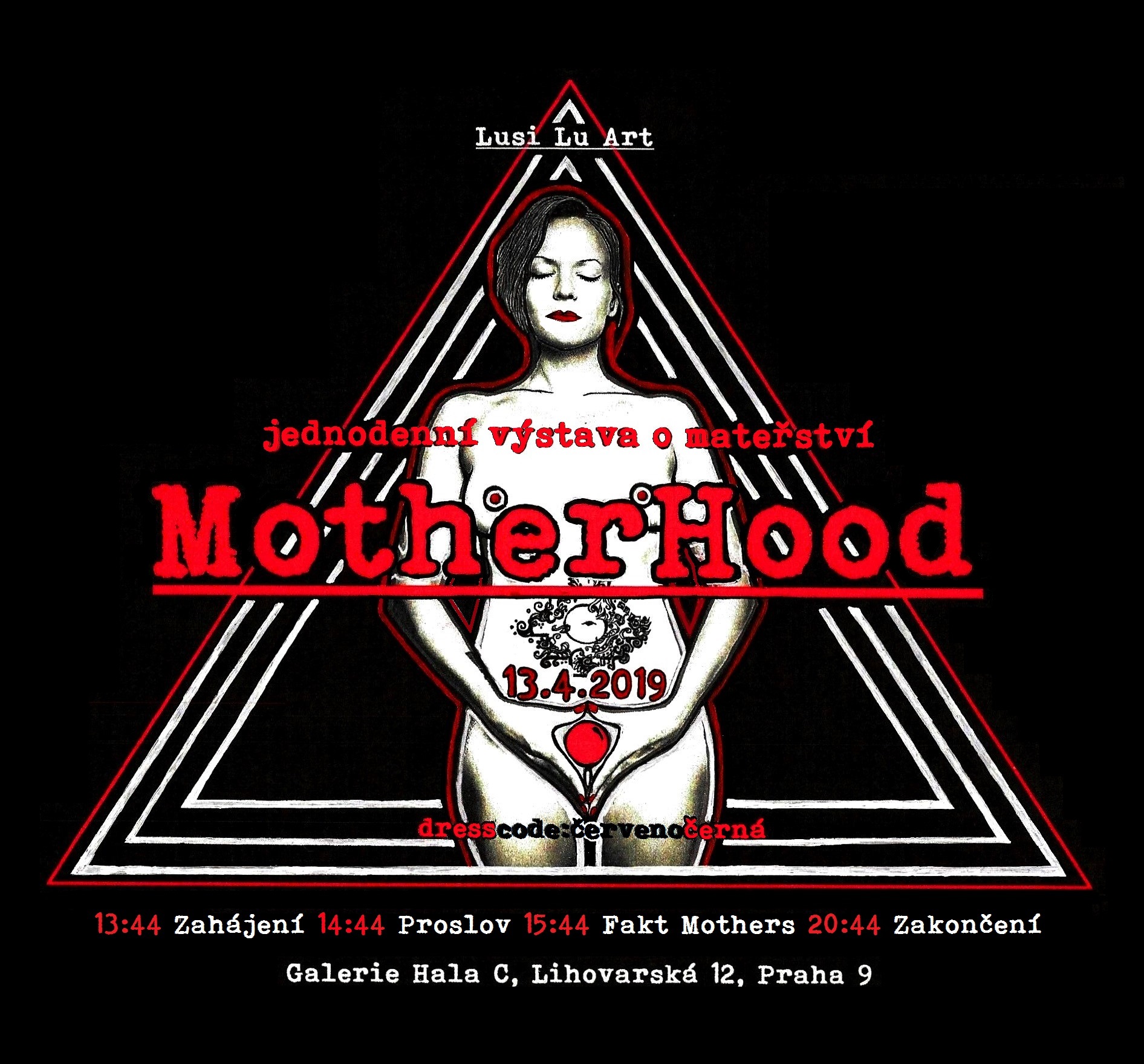 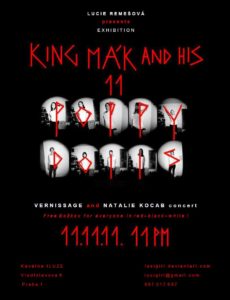 ▲ The history of this special one-day exhibition dates back to 11.11.2011, when I organised for the birthday of our dear Mák the first of art exhibition trilogy called „King Mák and his 11 Poppy Dolls“.  Here is the very long concept of this trilogy, for those interested.

▲For others, just in brief, Matěj Makovička, was our wonderful friend, who we called “Mák” (poppy in Czech). I knew him since the age of 14 and he left on February 20, 2010 at the age of 27 to the Club 27 into the company of others of his kind; Hendrix, Cobain, Morrison, Dean, Joplin etc.  On that day, we decided with group of friends, that we will honor his memory by establishing Makoism. The basic principles of this faith are very simple, just follow the example of Mák and be always totally yourself, let it all hang out, say in full what’s on your mind and enjoy your life!

How is Makoism related with Motherhood? Very closely. Mák have been bossing it from above for 9 years and exactly a year ago, April 13, 2018, my son Luchi joined him after 9 days in this world. Inspired my Makoism I would like to dedicate him also an art exhibition.

▲ I was planning to conceive my pregnancy artistically, to make a triptych, show myself at the end of each trimester and hold little Luchi in my arms at the last picture. But he decided that he would come among us sooner, during the second trimester 4.4.2018. So from the concept I was able to realize only one picture from the end of the 1st trimester, which is on the exhibition flyer.

▲ After all the events of April 2018, I tried to put myself together mentally and as a form of therapy I chose one week long “darktherapy”, where I spent my 35th birthday in June 2018. At the same place, in December 2015, my friend Míša also spent one week in the dark and then asked me to draw a portrait of her inspired by this strong experience. I created image, where she is surrounded by night sky and holds moon in her hands.

▲ During her “darktherapy”, Míša promised herself to return there when she will be pregnant. And that happened just in June 2018. She was there exactly a week before me in the same room. At that moment, a strong thought began to germinate in my mind, that the best solution is to overcome some trauma with the help of love, in my case, love for art. So I decided to transform my original concept of portraying my own motherhood and create this triptych with Míša instead of me – portray her in the same position pregnant and then with little Jón in her arms.

▲ However, around me wasn’t pregnant only Míša, but also 5 other very close friends. The huge euphoria that we all share this experience suddenly turned into the worst trauma. I had to spend a lot of inner strength to be able to continue communicating with them. Therefore the concept of this art exhibition was created as a form of my personal art therapy. I decided to portray all of my friends as my models and then give them the artworks as presents.

▲ This is how the MotherHood Art Exhibition concept was created. ▲

▲ In total there are 9 women, which is a very symbolic number. Luchi has been here for 9 days, its 9 years since Mák is bossing it all from the sky, the art exhibition is in Prague 9 Libeň, where my father’s side family comes from. To this day, the blinds, flagstaffs and other blacksmith work of my great-grandfather Antonín Čapek can be seen here. After him (along other important Anthonys) Luchi got the second name Antoni. In ideal case, 9 months is also the length of pregnancy.

▲ There are a total of 11 artworks, because Míša is shown (as the only one) on a triptych. Number 11 is the basic number of Makoism because (as I have already mentioned) the 1st exhibition was 11.11.2011, on the day of Mák’s birthday.

▲ Within the number 9 the pictures are divided into symbolic triads:

The photo shoot of Janita was just on October 4, 2018, exactly half a year after I gave birth and the same day when we published on her website an article entitled “Life is a great miracle and gift no matter how long it takes“, which summarizes my story and its outcome – this art exhibition.

▲ In the second one are 3 women, who hold their babies in their arms after giving birth:

▲ Terezka F. and Gabrielka were photographed 9 months after giving birth.

▲ Natálka was photographed on February 20, 2019 exactly one year after giving birth, because she is with her Elliot the embodiment of unbelievable synchronicity between Makoism and Motherhood. Natalie isn’t only one of the prime Makoists, and she was neighbor and friend of Mák since childhood.
Her son  Elliot was even born on February 20, 2018, elevating this date to a higher level. If you have read carefully, it is clear to you, that he was born on the very day, when the anniversary of establishing Makoism and the memory of our dear Mák is celebrated.

▲ In the third one is me are two other women, who I have met after giving birth and who enriched me very much:

▲ One is Káča, who I’ve met during somewhat dramatic circumstances in hospital Motol. We were in the same room, we gave birth on the same day, almost to a minute at the same hour, and an almost identical miniature 600gram premature little beings.
To her Amálka were predicted similarly catastrophic scenarios, such as to Luchi, but she is destroying all their tables with her viability and also Luchi as her (spiritual) brother takes care of her from above.

▲ The last woman of the whole exhibition is inspirational Eva, who I have met because of the article on Janitas website. After reading it, she wrote me, that the article resonated with her very much, because she experienced a similar story with her daughter called Živa. We met, befriended, and supported each other in hard times, because even the greatest empath is usually unable to do it, unless s/he has experienced the same situation. I photographed her 5 months after giving birth.

▲ The diversity of MotherHood ▲

▲ Each woman has very unique and interesting story, which I will publish on the day of the art exhibition under each picture. They show how extremely diverse pregnancy and motherhood can be. It can be a conception for the first attempt after a month’s acquaintance, but also a conception that occurred after a hard work on one’s own sexuality, after an abortion, after an ectopic pregnancy, after forty… Even childbirth itself has infinite forms; from less than an hour alone at home without midwife, to three caesarean sections or childbirth at the 25th week, which is the edge of the baby’s viability…
Last but not least, the important aspect of motherhoods diversity is that even women who lost their children were mothers and always will be (although in a different, perhaps a bit symbolic level).

▲ All women are nude in isosceles triangles with a side length of 44 cm, because Luchi was born 4.4..

The triangle and number 3 have many meanings. It is symbolically related to sexual energy, fertility and thus also motherhood. By joining two triangles a rhombus is created, which is the vagina symbol by all sorts of cultures, and nowhere its anything vulgar, perhaps just in our country. 😉
For the same reason, I created all the painted ornaments on bodies into triads and three points. The central ornament, that each of us has between the breast – at the hearth chacra – also symbolically depicts the vagina.

Each woman has on her body red line and ornaments, because red is the color of sexuality, blood, love and life. And also poppies.

The pictures also have a golden line around them, it is the color of the sun, vitality and the 3rd chakra, which is located in the abdomen where the solar plexus is. In the abdomen there is 3 trimesters created life and it is also the place of our feelings; in the stomach we feel anxiety, fear, trembling, but above all love in the form of flying butterflies.

▲ Love and life are the main themes of this symbolic one day art exhibition. I would be happy, if it would contribute at least a little bit to breaking a barrier by opening a topic, which is tremendously taboo and not talked about. If it would point out the various forms of motherhood in its wide variety and show, that even great pain can be overcomed, (creatively) transformed, and without forgetting it, it is possible to go on. Enriched, strengthened, as a better person who has changed his life values and as a proper Makoist has decided not to get bitter and continue to celebrate life in all its forms!

▲ Dress code at the opening is RED-BLACK (like poppy)

▲ Each woman will get her picture as a gift, however, some selected colored photographs will be in two copies and the second one will be for sale for 4 444 CZK.

▲ Photos from the opening can be found here.

▲ At the very end of this concept, it is necessary to express my thanks and gratitude to my favorite British artist and friend Michael Rowland, without whom this art exhibition at Gallery Hala C (now Beseder Gallery) would never have taken place.

The road to its realization was very thorny. For a long time I wasn’t sure if I should even go public with something so personal. However, my friend and musician Heda Sova Pečená, who in April organizes with her band “Fakt Mothers Fest”, has suggested to me whether I want to have an art exhibition at this event. I considered the name and the date as a clear sign, that I had to do it. In the end, we decided that my concept absolutely doesn’t fit to the type of event, but the idea of an art exhibition about Motherhood in April already grew in my head.

My friend Vendulka arranged it for me in a brilliantly symbolic place of Mama Coffee, I was totally thrilled and started to prepare everything. But the exhibition was finally cancelled due to various misunderstandings and I said to myself, “Ok, I am perhaps not supposed to go public with this, there will be no art exhibition. We will meet with all my women on the April 13, in private intimate mood and I’ll just give them the pictures … “

I wasn’t able to do the art exhibition opening any other day that April 13 (of course) so we thought about the solution, to the one-day exhibition on April 13 alongside the exhibiting artists. This idea excited me as a genius compromise between an exhibition that would hang whole month at some place and purely private event.